Natural disasters are powerful, unstoppable forces, and English metaphors from natural disasters reflect this fact. They are often used to describe political and social change, giving emphasis to the significance of the event.

So open the floodgates of descriptive English by learning these English metaphors and English idioms from natural disaster to prove you are on fire with your language learning. The next time an event sends tremors around the world and the news spreads like wildfire, you will be ready to discuss it with confidence!

So, let’s look at some examples of how to use this phrase:

Britain’s decision to leave the EU sent shockwaves throughout Europe and the world and created a political earthquake within the UK’s political system.

The election of Donald Trump is a political earthquake whose magnitude the entire world is urgently trying to understand.

The Russian Revolution was one of the defining events of the 20th century. It set in motion a global political earthquake and ripped apart the social fabric of Russia.

Now, try to answer the following questions. You can just think about your answer, or even write your answer down!

1. What caused the latest political earthquake in your country?

2. Can political earthquakes be a good thing, or is sudden change always dangerous?

3.       What eras of the past saw multiple political earthquakes happening around the world?

A common collocation of political earthquake is “trigger.” For example: 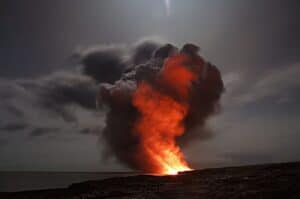 For something to erupt means for something to suddenly and dramatically happen. So, the meaning is similar to political earthquake, but is not about politics but about events.  Just like how a volcano erupts violently and suddenly, so can events and people. Violence and war often erupts, but so too does laughter.

Now, let’s look at some examples of how to use this phrase:

“As scary as this scenario might be, it’s not the only war that could erupt in Asia.”

At the Treaty of Versailles no one present was aware that it also signaled the opening act of a conflict that would erupt twenty years later with even more terrible consequences.

“The table erupted in laughter as I stifled my own giggles and told my son very seriously, “No, it’s not funny. It’s just a finger.”

Where has war erupted in the world recently? Where might it erupt in the future?

How can governments and police prevent demonstrations erupting into violence?

Have you ever told a joke that made people erupt in laughter? 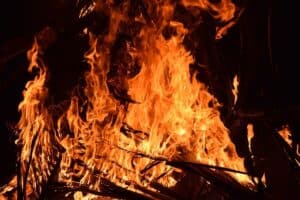 Let’s take a look at some examples.

“Luc is on fire this season, with 6 goals for his team in 6 matches.”

The Microsoft data platform team is on fire! It is delivering more updates and features faster and more thoroughly than ever before.

“The band was on fire tonight! I’ve never seen them play so well!”

What brand is on fire at the moment, succeeding at every turn?

What sportsperson or team is on fire at the moment?

When was the last time you were on fire doing something?

Again, let’s take a look at some examples:

School finished and the students flooded out of the building, ready for summer vacation.

The enormous Christmas tree in the town center attracts floods of people during the annual Christmas parade.

The videogames market was flooded with games by developers from all around the world.

What products have people flooded the shops to buy?

What recent movie have floods of people flocked (p.17) to see?

Are you comfortable among floods of people, or do crowds make you stressed?

A common form of flood is to flood the market. In this case, the market is the economic market – the “supply and demand” market. For example:

a. According to a Reuters report, Saudi Arabia has started to flood the market with diesel.

b. The market was flooded with cheap items due to oversupply, so it was a buyer’s market. 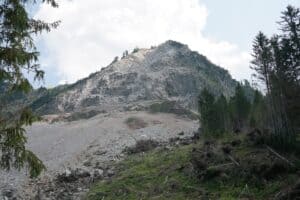 To win by a landslide means to win an election by a large majority. In any event where people vote, if there is a clear winner with a large majority, then they have won by a landslide. This is often used to discuss political events, but is used for any events where people vote. This phrase is sometimes also used to refer to any significant win in points-based or distance-based events.

“If you think he won this election big, standby because 2020 will be a landslide.”

Extolling the values of work, family, patriotism, and self-reliance, Reagan won a landslide victory in 1980, becoming the 40th President of the United States.

“Not only did she win, but she won by a landslide, thirteen thousand points ahead of second place.”

What was the last election that was won by a landslide? What policies led to this victory?

Can you list the positive and negative repercussions of a government winning a landslide victory?

If there was a vote on the “world’s greatest food,” would any food win by a landslide. 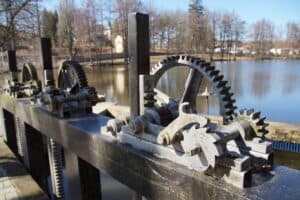 The first question opened the floodgates and students asked me hundreds more questions about life in the United States.

The growth of ecommerce and mobile payments has opened the floodgates, with millions of people becoming entrepreneurs.

Search engines need time to decide to open the floodgates and send SEO traffic in masses to your site!

What kind of comments on social media open the floodgates to angry replies?

What topic was previously not often discussed in the news but now the floodgates have opened?

Does relaxing visa restrictions open the floodgates to unwanted immigration, or is it a sensible policy? 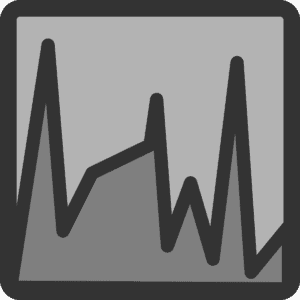 When an event sends tremors, it causes worry among a group, or it causes excitement among a group. Tremors are feelings of shock and uncertainty felt by a group of people. For example:

Firing employees can send tremors right the way through the rest of your organisation, of course.

The euphoric sounds of the song sent tremors across the Drum and Bass music scene and beyond.

Has any news sent tremors through the stock market recently?

What events can send tremors through financial markets?

Has any news sent tremors of excitement or worry through your community recently?

Events often send tremors through something:

“However in October, the chairman again sent tremors through the business community by saying that funding could be cut.”

Sometimes, however, something sends tremors across:

“The fatal crash of the helicopter off the coast of Norway sent tremors across the global helicopter industry.”